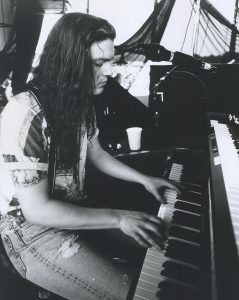 Many locals knew Dizzy Reed from his performances in Colorado with bands like Bootleg and Gauntlet. Then the keyboardist achieved more success than most regional musicians ever dream of—Guns N’ Roses recruited him in 1990 to give some additional color to their sound. Reed provided support on the two Use Your Illusion albums and toured with the controversial band.

“I was born in Chicago, but my family moved to Colorado when I was six years old. I grew up in Boulder and graduated from Fairview High School,” Reed said. “Pat Gill (of the Feds) and I started our first band together in the sixth grade. We were called the Hairy Bananas. We went through a few names and finally settled on Bootleg. We played together for ten years, until we were 20, and finally went our separate ways.”

Reed journeyed to Los Angeles in 1983—“I goofed off and ran out of money”—and came back to Colorado, hooking up with a band called Gauntlet.

“Every time I would meet a girl at a club, she would say, ‘Do you know the guys in Gauntlet?’ They opened for Ratt at the Rainbow Music Hall. I walked in and saw the girls screaming and the guys sitting down and booing because their girlfriends were into it. Immediately I knew, ‘I have to join this band.’”

After recording a demo at Colorado Sound Studios, Gauntlet split to Hollywood and changed its name to the Wild, living in a studio apartment behind Sunset Boulevard for two years. Guns N’ Roses moved in next door on the way to becoming the biggest band in Hollywood, and Reed got to know frontman Axl Rose. “I slept on floors with the guys,” he said.

“I didn’t really audition, because I was a friend from their early club days. They called up when it was time to get a keyboard player, and I said, ‘Let me think about it…okay!’ If you audition a bunch of people, you don’t get someone who fits in. There’s more to it than music.”

Reed became an accepted part of the group, known for his keyboard, piano and backing vocal work on albums and during live performances and music videos. He continued to record and play live with the Guns N’ Roses lineup, the only band member, besides Rose, to remain from the Use Your Illusion era.