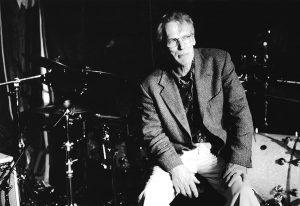 In June 1966, Ginger Baker recruited guitarist Eric Clapton and bassist Jack Bruce to form Cream. The group’s success catapulted them to stardom—in the second half of the decade, Cream set the pattern for the power-trio format, and Baker virtually created a new lexicon of rock drumming, elevating his instrument to co-lead status.

After leaving Cream, Baker never attained as high a profile. He resurfaced with Clapton in 1969 as half of another short-lived supergroup, Blind Faith. He developed Ginger Baker’s Air Force and, later, the Baker-Gurvitz Army before retreating from the scene to found a studio in Nigeria. He re-emerged with a solo career, moving to Los Angeles from Italy in 1988. In 1992, he joined the metal group Masters of Reality, and in 1993, Cream reformed for a performance at the trio’s induction into the Rock and Roll Hall of Fame.

That same year, Baker moved to Colorado. He hadn’t been encountering any problems getting his visa, but he had three counts against him that were never going to go away—two drug busts (in 1970 and 1971) and fraudulently obtaining a visa (when he toured in 1972 and failed to mention the busts on his visa permit). Under no circumstances was he ever going to get a green card.

Baker did a lot of work on his ranch in Elbert Country, near Parker, building two barns, a guesthouse and a home. His son Kofi, a drummer, played clubs in Denver.

Baker had secured a spot on the jazz scene by releasing two acclaimed albums with Charlie Haden and Bill Frisell. Then he hooked up with his own group, the DJQ2O—the Denver Jazz Quintet to Octet, a unit of local musicians known to perform following games Baker had organized at the Denver Polo Club. Coward of the County, with special guest James Carter, featured Ron Miles on trumpet and Artie Moore on acoustic bass, plus Fred Hess (tenor sax), Eric Gunnison (piano) and Shamie Royston (organ).

Then, in 1997, the Department of Justice showed up.

“Somebody made a phone call after a polo game,” Baker said. “My groom was English, and we were still working on getting her green card. She’d been with me for two and a half years. I trusted her with my horses.”

The groom was handcuffed, jailed and eventually deported. Two weeks later, the Department of Justice showed up again to deliver a subpoena stating that Baker’s status in the country was under investigation. Baker spent nine months waiting for the other shoe to drop.

His lawyers said Baker was only going to be fined, but then he appeared on radio station KRFX and dissed the INS on the air. The Justice Department reopened the investigation, saying Baker didn’t live in America, he lived in the United Kingdom.

At the same time, the Internal Revenue Service considered Baker a U.S. resident for tax purposes. Baker, in turn, refused to pay taxes for two years—and he used the money to move to South Africa in 1999.

“They’ll never let me back in? Big deal, so I’m heartbroken,” Baker said sarcastically. “America is not the world, although they seem to think so.”