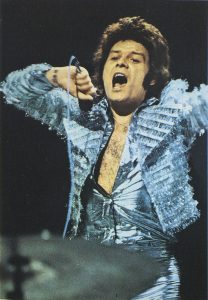 In the pantheon of sports anthems drawn from rock songs, Gary Glitter’s “Rock and Roll Part 2” (nicknamed “The Hey Song”) joined the strains of Steam’s “Na Na Hey Hey Kiss Him Goodbye” and Queen’s “We Will Rock You.”

It got its start in 1974, when 22-year-old Kevin O’Brien was the public relations and marketing director for the Kalamazoo Wings, Michigan’s entry in the International Hockey League.

“Back then, organ music was nearly synonymous with hockey games. But there was a movement to introduce some canned music during the games,” O’Brien explained. “So I started rummaging through my old collection of vinyl 45s.”

Tucked in a box in his basement was Glitter’s “Rock and Roll Part 2.”

“I tossed it on the stereo and immediately thought, ‘This is the song we have to use to bring the team out onto the ice.’”

In 1976, O’Brien took a job as marketing director for the Colorado Rockies of the National Hockey League. His copy of “Rock and Roll Part 2” went with him. He persuaded franchise officials to play it as a rousing celebration after Rockies goals. It didn’t blare through McNichols Arena that often because the team stunk, but soon local radio stations were playing the three-minute tune, referring to it as the “Rocky Hockey Theme Song.”

It was solely identified with the Rockies until 1982, when the hockey team moved east to become the New Jersey Devils. Denver’s other pro teams felt free to adopt the song. The Denver Broncos were the first to introduce “Rock and Roll Part 2” to the National Football League, admitting they took the song from the Rockies, while the Denver Nuggets did the same in the National Basketball Association.

“Rock and Roll Part 2” was then played incessantly on the public address systems and by bands in every high school, college and professional arena and stadium in America. Fans got on their feet, clapping, some punching the air as they belted out the song’s trademark “Hey!”

“I can’t believe that happened to my song,” Glitter said.

Glitter began life in England as Paul Gadd, and he tried almost everything seeking to get off the chicken-in-a-basket circuit before aspiring Svengali Mike Leander suggested a radical “image overview.” Gadd adopted the name Gary Glitter and created an outlandish, outrageous persona. Somehow, his endearingly silly glam rock struck a chord with the British public. Glitter and his Glitter Band sold millions with troglodytic variations on repetitious but engaging tunes. In 1972, “Rock and Roll Part 2” bulldozed its way onto the U.K. charts. The inspiration for it came from movies Glitter saw as a kid.

“When I went to cinema on Saturday mornings, I loved cowboys and Indians, and remember how the Indians used to run around the fire before the battle chanting, ‘Hey, hey, hey, hey!’? Years later, I was trying to create a ’50s kind of sound with a song. I wanted something totally different with a great beat, and I remembered the Indians chanting. I wanted it to sound like 50,000 chaps at Wembley Stadium.”

All the eventual stadium and arena airplay didn’t make Glitter rich. Venues buy a blanket license for the rights to use music, but the fees simply augment the royalties pool, regardless of which music is played most frequently in those places.