On September 3, 1972, the Grateful Dead performed before approximately 32,000 fans at the University of Colorado’s Folsom Field in Boulder. The band’s ﬁrst stadium show in Colorado was marked by torrential rains, rare performances (“Rockin’ Pneumonia and the Boogie Woogie Flu”)—and, at one point, hundreds of lids of pot were tossed into the air from the crowd and from the stage. (Comments have been edited for length and clarity.)

Bill McKee, dead.net: “I was a country bumpkin, right off the farm in Illinois, on my first trip west. I was traveling with two friends and we had no idea that the Dead were playing in Boulder. We just happened to be in the right place! I remember walking into the stadium and my life immediately changed. Couldn’t believe it…frisbees, balloons, beautiful women twirling up by the stage…a father telling his son to remind mommy to not forget the peyote…”

sailing vessel…, dead.net: “I drove my 1966 Ford pickup down from Aspen for that, my first show. There were half a dozen of my mountain hippie friends on board. $3.50 got us in the gate, and I remember crowds flocking through the entrances to the field.”

clark cowboy, dead.net: “We had bought tickets to pick up at the ticket office. We got there and our tickets were not waiting for us. What to do, waiting for the gates to open and no tickets? After the first rush of people got in, they went straight to the top of the stadium and threw their tickets down, right into our hands. It was a miracle.”

sailing vessel…: “The day and the music went on forever, through sun, heat, rain and fun…and to my amazement, beautiful bags of green herb, each with papers and matches, flying into the hands of any head who could catch ’em.”

Jerry Garcia, Grateful Dead: “That blew our minds! The audience thought we were doing it, but it wasn’t us—we couldn’t afford it.”

Buffalo, dead.net: “Out of the corner of my eye, I spotted what looked like birds being released into the air, but they disappeared. I asked my friends if they saw it and they were like, ‘Sure, man, whatever you say.’ A few minutes later I saw the birds coming at us and I caught one and it was a perfect lid of good Mexican weed complete with rolling papers and farmers matches. It looked like the Dead’s roadies had bushel baskets or cardboard boxes full of lids and they were grabbing them and throwing them out to an appreciative crowd.”

Bill McKee: “Yep, survival bags of pot filtered all the way back to us. My cousin found us in the crowd and brought us a bag. To this day he still believes that the bags were dropped from a helicopter!”

niusteve, dead.net: “I was high up in the stadium, too far to catch any of the free dope, but it was fun to watch. I seem to remember security trying to get to the folks who were vaulting the prized packages, but they kept popping up at different parts of the field, and all we could see were the plastic baggies shooting up into the crowd like fireworks.”

Gregor, dead.net: “I was the person who came up with the idea to give away 1,000 four-finger lids of Rainbow Cannabis. We were the Range Riders, having met the boys when they played the Glenn Miller Ballroom, April 13, 1969, a gig we actually helped book…for $800.”

Buffalo: “I know I rolled all mine up and passed it around. About that time, Jerry Garcia said something to the effect of ‘We love you, Boulder’ or ‘Enjoy it, Boulder.’”

Captain Rex, dead.net: “Many persons were wandering through the crowd with large bags of pot and throwing them into the crowd. The smoke got so thick you could hardly see the stage. The army showed up and surrounded the stadium. Officer in charge went on stage, an obvious threat to shut it down and arrest everyone. The band played on. Could not hear the conversation but was clear that Garcia said, ‘Arrest 20,000 people, go ahead.’ The army left.”

Jerry Garcia: “That was truly a cosmic day—the look of the concert, the weather.”

Bob Weir, Grateful Dead: “It rained rain and ounces of marijuana, and we almost burned down the place. It got real crazy—it looked like St. Elmo’s fire all over the stage at one point.”

Buffalo: “When the rain came, we were too messed up to move, so we just put the blanket over us and waited. People were worried that someone on stage would be electrocuted like what happened to Les Harvey from Stone the Crows a year or two earlier.”

John Perry Barlow, Grateful Dead lyricist: “Bear (Owsley Stanley) had a whole bunch of notions about electricity, and one of them was that the stage should always be grounded to itself, thereby becoming what is called a ‘floating ground.’ Once this huge electrical storm started, the energy potential of the stage was different from its surroundings, so we literally had Saint Elmo’s fire on everything. Balls of lightning were rolling around the equipment, but the band went right on playing while standing in two inches of water. There was a big canopy over the stage, and we ripped holes in that because of the wind, so the water onstage just got even deeper. At one point, some madman with an electric Skilsaw in his hand began cutting holes in the stage so the water would drain away. For some reason, nobody got electrocuted. Which I guess we could all thank Bear for.” (from the book The Life and Times of Augustus Owsley Stanley III by Robert Greenfield)

clark cowboy: “I had enough rain gear to hunker down and wait the storm out. They played ‘I Know You Rider’—I swear this is true—when they sang ‘I’d shine my light through the cool Colorado rain,’ the sun came out for the first time, lighting up the Front Range of the Rockies, right on cue. Everyone who sat high enough in the stadium to see it let out a roar. I’ll never forget it.”

Bill McKee: “I also remember wandering down onto the field and smoking a joint with a couple during ‘Johnny B. Goode’ as the rain poured down. Spent the last set right down front. The bus definitely stopped for me that day.”

Buffalo: “We were at the field for over six hours and it goes down as one of the two best concerts I have ever attended.”

sailing vessel…: “My life has never been the same…Over the years, my wife and I have been to countless Dead and Dead-related shows, but I’ll never forget the feeling that day in Boulder. It was truly Christmas for the senses—the amazing music, the loving people, the charm that oozed from the band and their roadies. We drove back up to Aspen that evening and I knew I had found my home. It was wherever the Grateful Dead were, because that’s where I knew my new family was.” 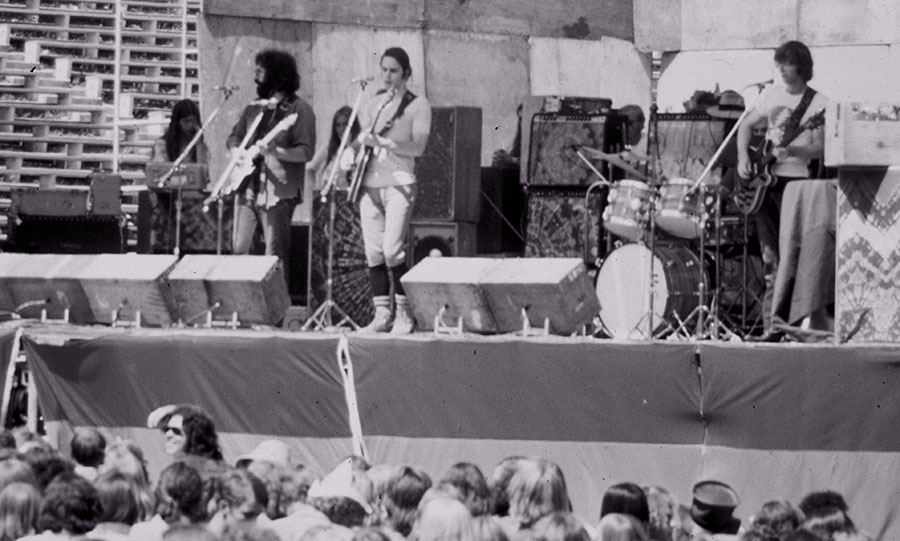 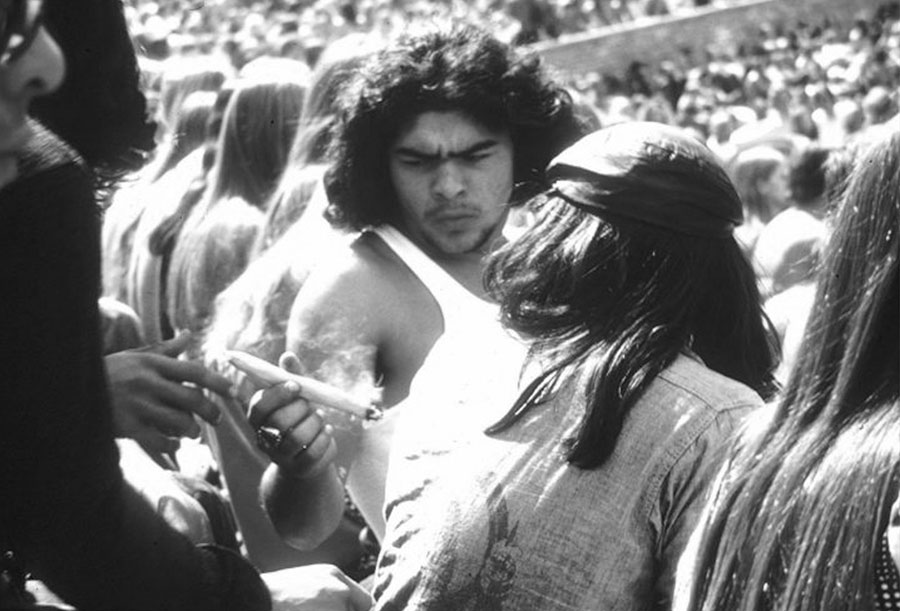 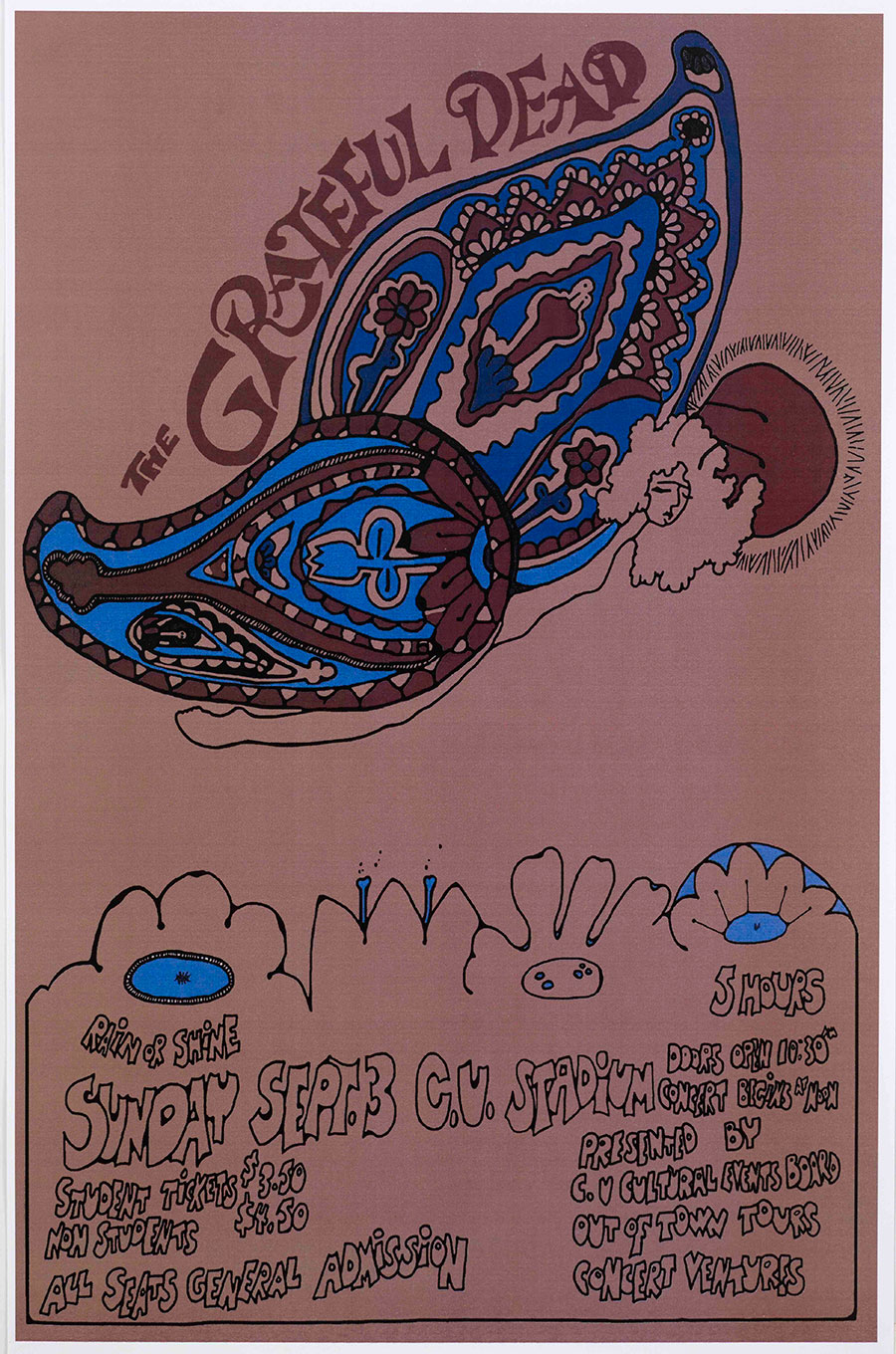