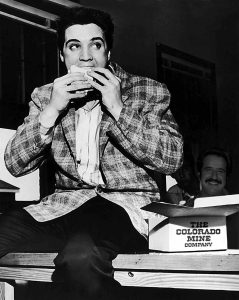 The dietary needs of Elvis Presley made his other pursuits appear tame. “The King” once flew from Memphis to Denver to fetch a concoction from the now-defunct Colorado Mine Company restaurant in the suburb of Glendale. It was a house specialty he had sampled only once after a concert and apparently couldn’t find anywhere else—the Fool’s Gold Loaf, a particularly sumptuous feast.

The main ingredients? One loaf of sourdough bread, smeared with butter and tossed into an oven at 350 degrees, and one pound of lean bacon, fried until crisp and drained on paper towels. After 15 minutes, the loaf was removed from the oven and sliced lengthwise. The interior of each half was hollowed out, the insides were filled with one large jar of smooth peanut butter and one large jar of blueberry preserves. The bacon slices were added, and the loaf was closed. The cost was $37.95 per sandwich—hence the name.

In December 1975, Presley decided to leave the lonely confines of Graceland, his mansion in Memphis, for the holidays and his 41st birthday (January 8, 1976). He took Linda Thomson, his girlfriend, and several of his “boys” to Vail, Colorado, to celebrate.

“He flew in on his jet, and we rented a Trailways bus,” Captain Jerry Kennedy, head of the Denver vice squad, said. “We sang Christmas carols on the way up. We took off work for ten days; we got him lodging and ski outfits.”

Kennedy obtained permission to use the ski slopes at night, and Elvis and his entourage rented snowmobiles for noisy 3 a.m. rides through the woods.

Shortly after the holiday revelry, Presley went on a now-legendary car-buying binge. Wearing a white woolen ski mask and bulky snowsuit, he visited Kumpf Motors, a luxury automobile showroom in Denver, arriving three hours after closing time with a large party. He told three in the group—Kennedy; Detective Ron Pietrofeso, who had been Elvis’ police guard during concerts in Denver months before; and Dr. Gerald Starky, a police physician who had treated Elvis a day earlier for a scratch he said was caused by his ski mask—to pick out the cars they wanted.

“Elvis asked me what I was driving. I told him that I had an Audi, an economy car,” Kennedy said. “He told me, ‘I’m going to give you a car like mine.’”

Presley purchased a top-of-the-line Lincoln Mark IV for Kennedy and Cadillacs for Pietrofeso and Starky. The $13,000 cars were his way of saying thank you. Kennedy had known the King since 1969.

“I was the off-duty work coordinator, and he had a concert at the Denver Coliseum,” Kennedy said. “They wanted security at the Radisson Hotel, and he had the whole 10th floor. We had to keep the girls out. Elvis came out of his room, and he was very friendly. He liked policemen. Elvis and I struck up something of a friendship. He felt like he was part of the Denver Police.”

And the force treated Elvis accordingly. He owned an officer’s uniform that he wore on visits to the Mile High City and was given an honorary Denver police captain’s credential.

Watching the morning news the day after the car-purchasing spree, Elvis saw local anchorman Don Kinney quip that he wouldn’t mind getting a car, too. The King had a new Cadillac delivered to the station the following day and then went home to Graceland.

“He was generous to a fault,” Kennedy said. “He ended up purchasing a dozen vehicles in Denver. If he gave something to one person, he had to give it to somebody else, too.”

Most of the time, Kinney kept the Cadillac safe in his garage, but he occasionally drove it from Denver to a family farm in Montana. On one such occasion, on August 16, 1977, the car broke down. Later that day, Kinney learned that Elvis Presley had done so as well—he was dead at age 42, found unconscious in the bathroom off his bedroom at Graceland.