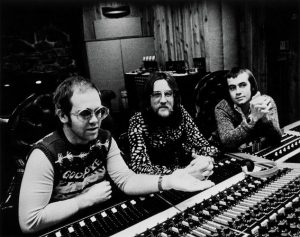 In the mid 1970s, the rage among top recording stars was to hole up at “destination studios.” So they headed for Caribou Ranch, near the Boulder County foothills hamlet of Nederland, Colorado. Owner Jim Guercio, best known as Chicago’s producer, had transformed the place into an opulent retreat for pop music’s aristocracy, and the legendary recording complex gained additional prominence when Elton John recorded the gratefully titled Caribou.

“It really is luxurious,” John raved. “The only thing you have to get used to is that it’s so high up, you keep gasping for breath all the time.”

Each of John’s first seven studio albums had been made in Europe. The flamboyant star, always on the go, was in the middle of another of his traumatic periods because of the rigors of his commitments. Although many of his early albums were recorded quickly, the making of Caribou in the spring of 1974 was particularly stressful, squeezed into the smallest time frame yet.

“We were under unbelievable pressure to finish the album in just over a week because we had to go right into a tour of Japan and Australia,” he said. “We wrote and recorded Caribou in eight days—14 tracks in all.”

Caribou topped the album chart on both sides of the Atlantic, remaining in the Billboard Top 200 albums chart for over a year. It spawned John’s fourth million-selling single in eight months, “Don’t Let the Sun Go Down on Me.” The emotional ballad became a classic, yet it was the most troublesome track.

John recorded several other classic albums at Caribou Ranch, including Captain Fantastic and the Brown Dirt Cowboy and Rock of the Westies, which reached the No. 1 spot on the charts its first week out.

Lyricist Bernie Taupin, the celebrated collaborator who put the words in John’s mouth for three decades, said, “Some of my favorite work that we ever created was done at Caribou. Captain Fantastic is one of our finest records, and probably the most underestimated of our career. Oddly enough, it wasn’t a particularly good point in my life. We were pretty wacked out in those days. I don’t know where there was more ‘snow,’ in the mountains or in the cabins!

“But there were some great moments, like having Stevie Wonder drive me in a Jeep from the cabin to the studio. I think he set me up—he probably practiced it with somebody else. The funny thing was, I didn’t pay any attention to it—a blind man driving didn’t faze me at all!

John had met Lennon for the first time in October 1973, in the Los Angeles studio where Lennon was recording his Rock ’n’ Roll album. The next year, John was in a New York studio doing backup vocals for Lennon’s Walls and Bridges album, and the result was the hit single “Whatever Gets You Through the Night.”

As John recalled, “I said, ‘Now, I really want to do one of your songs as a single. Which song would you like me to do?’ He said, ‘No one ever recorded “Lucy in the Sky.’”

John suggested Lennon stop in Colorado on his way back from a trip to California. The session took place at Caribou Ranch in July, with Lennon’s contribution billed as “the reggae guitars of Dr. Winston O’Boogie.”

“We had the playoffs in Denver,” the tennis great said. “Elton came because he’d been recording up at Caribou. He was all excited, saying, ‘You’ve got to listen to this tape. This is it, the song I wrote for you,’ So he played me a rough mix of ‘Philadelphia Freedom,’ and it was great. And when he got to the chorus he said, ‘Listen to this part. Hear the beat? That’s when you get mad on the court.’”

“Philadelphia Freedom” had the Gamble-Huff style backbeat of the great O’Jays and MFSB records that came out of Philadelphia, and it took only five weeks to become John’s fourth No. 1 single.

In August of 1975, Elton John joined the Rolling Stones onstage in Fort Collins, dressed in a cowboy hat and a Los Angeles Dodgers windbreaker. He wanted to give a barbeque for the Stones at Caribou, but after the show, the Stones turned down his offer.