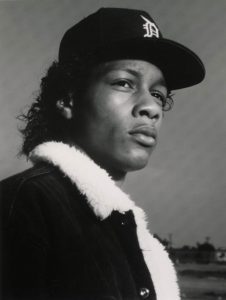 In the fall of 1991, Los Angeles rapper DJ Quik was arrested for allegedly throwing a bottle into the crowd during a concert at Denver’s Mammoth Events Center. A fan was struck in the cheek, though one witness said another band member had thrown the bottle.

Quik, born David Blake, was booked for investigation of second-degree assault and released on $5,000 bond. He then proved his mettle with the song “Jus Lyke Compton,” a definitive bit of regional touting which reflected his thoughts after being exposed to life outside of South Central L.A.

The rhymes took on a resigned, almost dispassionate tone as Quik recounted the gangsta hood resistance he had experienced on tour—how the self-destructive violent lifestyle had become endemic to urban life, how the scene in each city reminded him of home:

How could a bunch of suckers in a town like this/Have such a big influence on brothers so far away?

The “Jus Lyke Compton” video was shot on the locations of the cities in the song—Oakland, St. Louis, San Antonio and Denver—and briefly re-enacted each telling outbreak of violence. In St. Louis, it was a Blood/Crips gunfight.

“In Denver, it was a simple case of a bunch of hard heads trying to prove a point,” Quik said. “A long time ago, I made an underground tape and it contained some Blood shit in it. I wasn’t gangbanging. I made it for some friends—I knew they would buy it. I didn’t know motherfuckers everywhere were liking the raps. It’s a word-of-mouth thing. It all is. And one thing led to another.”

“So I was the aggressor then? I got more to lose. I’m out here trying to do something for myself. I didn’t jump up there in Denver and start provoking those motherfuckers. They started throwing stuff on stage, throwing gang signs. So I flipped them off and threw rival gang signs. They hit somebody in the head— nobody knew who threw the bottle, but they put me in jail. I go through this shit everywhere. In the song, I didn’t mention Houston, Memphis or Phoenix—those were serious scenarios, too. I’m not singled out as a Blood. I’m singled out as a successful little motherfucker.”

The single’s intensity and wit made Quik a household name in hip-hop circles and helped him earn a gold album—Way 2 Fonky later reached the 24th spot on comedian Chris Rock’s list of “The Top 25 Hip-Hop Albums of All Time” for Rolling Stone.