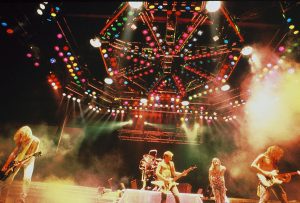 To commemorate the 227-date “Hysteria” world tour, Def Leppard filmed a concert video at Denver’s McNichols Arena on February 12 and 13, 1988, titled In the Round–In Your Face.

Initially, the superstar British quintet had planned to film a performance video for the hit single “Pour Some Sugar on Me.”

“But then we said to hang on a minute—we’d be daft to shoot just one song,” singer Joe Elliott recalled. “So we decided to do the whole show and see what we got. We wanted to do it in the best possible place. On that leg of the tour, the Hysteria album hadn’t really taken off nationwide. Denver was the first place we were doing two nights, and they were both sold out. It was obvious—we were kings in Denver. And we wound up with a hell of a lot of good footage. The audience was beyond belief.”

The band members financed the filming themselves—“We couldn’t get the record company to pay for that one,” Elliott said—and the project served as a memorial to their massive high-tech circular stage construction.

“We wanted to make an event, so we put the stage in the middle. I described it as a 60-by-40-foot boxing ring without the ropes. It was a lot of fun—the director (Wayne Isham) auditioning girls that you wanted to shove against the fence down at the front, all the usual rock ‘n’ roll trappings. For us Englishmen, the only drawback with doing it in Denver was the altitude. When you listen to the tape, you can hear me getting out of breath big-time. It’s a good thing we were in our mid 20s, because we would have been in cardiac arrest after five songs.”

The 90-minute In the Round–In Your Face video contained 30 seconds of additional footage from a trio of shows in Atlanta “because the director decided he needed more audience shots,” according to Elliott.

The “Pour Some Sugar on Me” clip became a finalist for both Best Stage Performance and Best Heavy Metal Video in the MTV Music Awards. In the Round–In Your Face showcased 13 more pop-metal hits, including “Foolin’,” “Rock of Ages,” “Photograph,” “Animal,” “Armageddon It,” “Bringin’ On the Heartbreak,” “Rock! Rock! (Till You Drop),” “Women,” “Too Late for Love” and “Hysteria.” 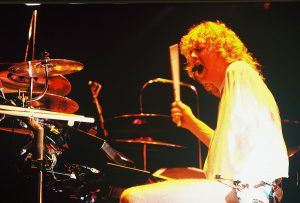 The most riveting aspect of In the Round–In Your Face was the effort put forth by drummer Rick Allen. In a much-publicized incident, he lost his left arm in an automobile accident during the recording of the Hysteria album. But Allen was determined to continue playing with one arm, and onstage, he unveiled his new drumming style for everyone to see. He fostered a technique where his left foot substituted for his missing limb to go along with a specifically designed Simmons electronic drum kit.