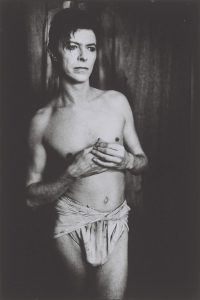 David Bowie in The Elephant Man

In the 1970s, David Bowie was rock’s ultimate chameleon. From the glam rock of his Ziggy Stardust character to the R&B of his Thin White Duke persona, he went through musical styles faster than he went through clothes, always moving on to another role, or even films.

On July 19, 1980, Bowie showed he had another surprise up his sleeve. He made his theatrical debut playing the title role in Bernard Pomerance’s play, The Elephant Man. The Tony Award-winning hit opened its run in Denver, as the producers wanted to work out the kinks in a smaller market.

“The first moment on that Denver stage was probably the most scary moment of my life,” Bowie recalled. “Around music, with something I’ve written or a piece that I’ve designed, I’ve got a fair amount of faith in what I’m doing. But I didn’t really know what was going to happen that first night. It was great just to be allowed to continue the performance.”

A few years prior, Bowie had lived in Berlin as “a frame of reference,” avoiding the United States unless he was working. But an appearance on the popular Saturday Night Live television show brought him to New York City during Christmas of 1979. There he saw The Elephant Man and met its director, the voluble Jack Hoffiss.

“It was nuts. It made no sense at all,” Bowie admitted. “I’d never been offered a play before, and because of that, I accepted! Jack really convinced me that if I was going to fall on my face, he’d fall with me. I thought it was a wonderful performance piece, strange enough to keep my interest. So I jumped at the chance. I’d run out of good books to read.”

Bowie always had more than a passing fancy in wedding theatrics and rock. He’d worked with Lindsay Kemp’s mime troupe circa 1966 as David Jones, and his past experience helped him to prepare for The Elephant Man. In the drama, set in early 19th century England, Bowie played John Merrick, a young man horribly deformed from birth who was gradually transformed from a sideshow freak into a darling of aristocratic British society.

Bowie performed sans makeup or padding, letting his body illustrate the contortion—his twisted torso slumped to one side, his head arched at an uncomfortable angle, his right leg dragged.

“I get headaches. I take aspirin,” Bowie allowed after opening night. “Actually, I’ve wanted to direct from the word go. One of the many reasons I became involved in rock ’n’ roll was that it gave me the opportunity to assemble shows completely and direct them—give myself some free practice and get paid for it. It was a good way to make a living.

“It’s the idea of putting over various points of view which intrigues me. It’s creating environments that aren’t there, seeming illusions. Rock productions and the theater stage are both very similar. You have to employ the same methods of vision to create a microcosm or a macrocosm. It’s your yin and yang, ain’t it?”

Bowie shortly took over the lead role in the New York production of The Elephant Man and won rave notices.