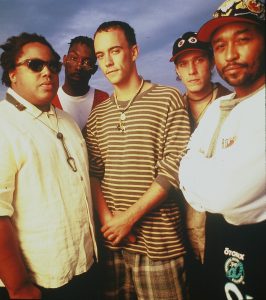 Hailed as one of rock’s few emerging superstar acts of the late ’90s, Dave Matthews Band came out of Charlottesville, Virginia, in 1991, its success fired by a tenacious do-it-yourself approach. By playing nearly 200 gigs a year and releasing its own CDs, DMB built a zealous following based largely on word-of-mouth publicity. It wasn’t long before the members ventured farther afield, first to resorts in Colorado, an area of the country that had a history of supporting acts from outside the mainstream.

“All of Colorado was huge,” Matthews said. “I was surprised that we could go so far away and be received with such open arms. Our not-quite-suffering audience is made up of a lot of middle-class and upper-middle-class, because we initially were aiming at the university audience on the East Coast. They spend a lot of time in Colorado during ski season.”

In 1994, Dave Matthews Band chose to film the video for “What Would You Say,” the group’s first smash, at three sold-out shows at the Fox Theatre in Boulder. The marketing was intentionally low-key—the band didn’t shoot the clip until three months after the release of its major-label debut album, Under the Table and Dreaming.

“It was a way of saying thanks. Everything fell together there—the synchronicity, the fact that we’d always had a vibe there,” Matthews said. “It was one of the most ambiguous songs on the album, so we put the video together slapdash with no story—no disgruntled babes walking out of the house, slamming the car door and driving away.”

“What Would You Say” became a top 20 MTV video, sales of Under the Table and Dreaming took off and Matthews became a star.