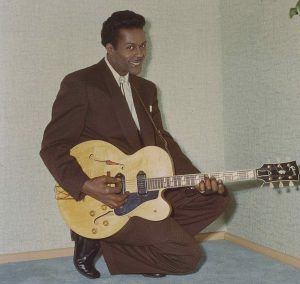 As a songwriter, Chuck Berry stood head and shoulders above rock ’n’ roll’s early stars. The majority of his output was self-penned, and during the second half of the 1950s he added new hits to his repertoire with almost every tour—compositions that gave the explosive new music genre a good deal of its language and style.

Several tunes were written from true-life experiences. “Sweet Little Sixteen,” Berry’s highest-ranking hit of the decade, was inspired after a Denver concert at the Auditorium Arena.

“I wasn’t sweet little sixteen when I wrote it, of course,” Berry said. 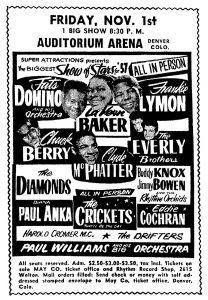 Berry had embarked on impresario Irving Feld’s “Biggest Show of Stars for ’57” package tour, with Fats Domino, Clyde McPhatter, the Crickets, LaVern Baker and others. The event went through every region of the United States, including some—such as the northern Rocky Mountain states—which had never witnessed live rock ’n’ roll.

“I happened to open the show this particular date in Denver, and while the other acts were performing, I walked around and signed autographs,” Berry said. “I noticed that there was this little girl wearing a big, flowery yellow dress running around and around the oval-shaped auditorium. I passed her six or seven times—she was searching for autographs a mile a minute, waving her wallet high in her hand.

“She never saw one complete act fully, and she didn’t seem to care about who was on stage—she only cared about when they came off so she could get her autographs. And this made me think that she wanted things to remember.”

Berry never got around to speaking with the girl who would serve as his muse for his classic celebration of everything beautiful about fandom. “I wish I could have gotten her name,” he said. “I was writing as I was looking at this kid, and I got several lines of ‘Sweet Little Sixteen’ that night.”

“Sweet Little Sixteen,” with pianist Johnny Johnson rocking at top form, sold more than one million copies. It reached No. 2 on the Billboard pop charts in March 1958 and topped the R&B chart for three weeks. In July 1958, Berry sang “Sweet Little Sixteen” at the Newport Jazz Festival, demonstrating his trademark duck walk, which he had developed two years prior. Playing a complex pattern on his guitar, he flashed across the stage, knees bent, without missing a beat. It left the audience breathless, and the fluid grace of his workout was later seen in Jazz on a Summer’s Day, Bert Stern’s classic 1960 documentary film.