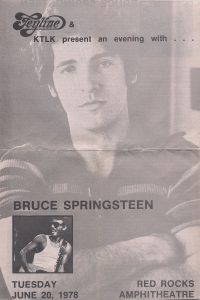 On June 20, 1978, Springsteen and the E Street band made their Colorado debut at Red Rocks Amphitheatre in support of Darkness on the Edge of Town, his first release in almost three years. The interim had been spent battling his ex-manager, letting the Born to Run hype settle down and recording several albums’ worth of songs. He had agreed to do his first-ever outdoor show on a national tour only after weeks of cajoling by his manager and booking agents. A gig in the wide-open spaces? He was apprehensive about a lack of intimacy, dubious about the havoc that it might wreak among his sound crew, cautious of problems with audience communication.

Only 6,200 persons had the foresight to catch it, but on that Tuesday night, Springsteen put on a legendary performance, one that he later claimed was the best of the entire tour. The new songs—the opening “Badlands,” “Prove It All Night” and “Racing in the Streets”—came to life as the kid from Asbury Park spat out the words, raced around the stage and exhorted the crowd, playing for three hours and three sizzling encores. Springsteen had the charisma of a kid who had just hopped out of his folks’ station wagon and seen the mountains for the first time. He and his band managed to keep their Jersey sensibilities intact—“Nice place you got here…bunch of big rocks,” he said with a laugh. The adoring audience rushed the stage, and Springsteen’s loyalty to his new friends out West was incredible.

“The idea is to deliver what money can’t buy,” he said backstage after the gig.