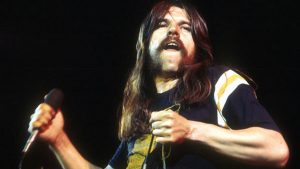 In 1976, after a decade of being rock’s “Beautiful Loser,” Bob Seger began his overdue breakthrough to stardom when his Live Bullet album went gold. Live Bullet, recorded at two sold-out shows at Cobo Hall in his hometown of Detroit, featured versions of such early Seger classics as “Ramblin’ Gamblin’ Man,” “Katmandu,” “Turn the Page” and “Get Out of Denver.” The 1974 single “Get Out of Denver” had peaked at No. 80 on the Billboard chart.

Was the tune based on a real-life experience? In his first-ever Denver gig, at Ebbets Field in July 1974, Seger introduced the song as “…a little story that took place real near here, up near Loveland Pass.”

“Sorry,” Seger grinned later. “At that stage of my career, I tried to write a rocker for every album that would be fun to do live. ‘Katmandu’ was also done that way.

“I wanted to write a Chuck Berry song, and I liked the cadence of Denver in the lyrics—Albuquerque wouldn’t fit.

“But I made it all up. I never got run out of Denver.”

The song became a classic, covered in the next decade by Dave Edmunds, Eddie & the Hot Rods and Dr. Feelgood.