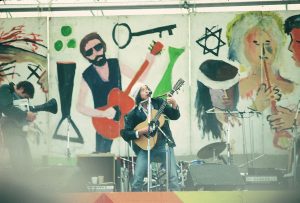 At 18 years of age, still lacking any real direction and learning his craft, Bob Dylan was essentially a scrawny kid trying to be a folk singer. He arrived in Denver in the summer of 1960 and wandered over to the Satire Lounge on Colfax Avenue to play some Woody Guthrie music. Then he was offered his first job as a professional entertainer at the Gilded Garter, a honky-tonk palace in Central City, a restored frontier town that had become a Colorado tourist attraction, complete with saloons and bad-guy actors with Western outfits and blanks in their six-shooters. His experience lasted for a week and a half.

15 years later, Dylan was once again an ascending star after spending the late 1960s and early 1970s refusing to behave like the counterculture hero that the previous decade had made him. The next logical step was to hit the road, but little about the ensuing tour followed any logic.

The Rolling Thunder Revue started out in October 1975 with the idea of a communal tour. Rather than playing formal concerts at large rooms and coliseums, Dylan assembled a loosely knit group of merry old friends. The large, shifting entourage—including Joan Baez and such Greenwich Village regulars as Ramblin’ Jack Elliott and Bobby Neuwirth and guests Allen Ginsberg, Joni Mitchell, Mick Ronson, Roger McGuinn and Arlo Guthrie—toured until spring 1976.

The Rolling Thunder Revue started out with surprise concerts at small halls and worked up to outdoor stadiums. Dylan and his production taped a show in Clearwater, Florida, and the program was auctioned off to NBC-TV after being offered to all three networks. A few weeks later, Dylan then rejected the tape. Instead, he gave his nod to a group of documentary makers who filmed the May 23 concert under cloudy skies at Colorado State University in Fort Collins. 25,000 fans were drenched by rain.

The footage of the Colorado concert, appropriately titled Hard Rain, was broadcast on NBC in September. Most mainstream TV critics panned the show. That month also saw the release of the live Hard Rain album, which consisted of nine songs, four of which came from Dylan’s TV special; it was certified gold.

“I don’t really talk about what I do,” Dylan said to TV Guide. “I just try to be poetically and musically straight. I think of myself as more than a musician, more than a poet. The real self is something other than that. Writing and performing is what I do in this life and in this country. But I could be happy being a blacksmith. I would still write and sing. I can’t imagine not doing that. You do what you’re geared for.”