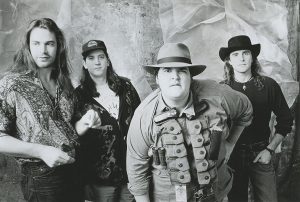 In the 1990s, Blues Traveler gained a reputation in the revival of the extended jam-friendly style of 1960s and 1970s groups. Devotees celebrated with a level of zeal and enthusiasm once reserved for the Grateful Dead, following the New York-based blues-rock quartet to Colorado—since 1992, Blues Traveler has been a Fourth of July fixture at Red Rocks Amphitheatre.

Opening for the Allman Brothers Band on July 3 and 4, 1992, marked the beginning of Blues Traveler’s run.

“Past New York City, Colorado had been the first place that really opened up for Blues Traveler,” guitarist Chan Kinchla said. “From the very beginning of the band, we had great support in Colorado, way before we had any following at all in the rest of the country. Red Rocks was just sitting there for us. The fans are just as incredible as the venue—it’s such a high-energy, open, rocking crowd of mixed, diverse people. That mentality is what’s great about Colorado. It just happened—the next thing we knew, we’d done Red Rocks seven times.”

Blues Traveler grew its following with extensive touring, sometimes with over 300 dates a year. The band, fronted by heavyset singer and harmonica player John Popper, crossed over into mainstream success in 1994 with its fourth album, the multi-platinum Four, which spawned the Top 10 hits “Hook” and “Run-Around.”

Blues Traveler’s tradition of Independence Day shows at Red Rocks was interrupted only in 1999 when Popper—who’d been experiencing chest pains for months—was hospitalized and forced to undergo an angioplasty. Weeks later, tragedy struck when bassist Bobby Sheehan was found dead in his New Orleans home. Sheehan’s death and Popper’s struggle with obesity put a damper on the group’s success. However, the new millennium saw a renewed vigor, with Blues Traveler starting in new musical directions and releasing work on smaller independent labels. Live on the Rocks, recorded at Red Rocks on July 4, 2003, was one of the band’s strongest live albums, featuring plenty of solid improvisation and funky blues jamming.

“Through all the changes in the entire history of the band, Red Rocks on the Fourth of July is the only constant thing we’ve done,” Kinchla said. “The opportunity to play there almost 25 years in a row is just insane to me, something I’m thankful for.

“When we opened for the Allman Brothers in 1992, someone said, ‘When the fireworks come, we’ve got to go to the top.’ So a bunch of us climbed all the way up and watched the Allman Brothers with the fireworks crackling in the background. And since then, Blues Traveler has been the headliner—every year I’ve been down on the stage playing. When the fireworks start going off, the crowd goes nuts, and it always brings me back to the first time I was there—‘God, this must look amazing to them right now. I’m a little jealous. I wish I was up there!’ But I have those memories. I know what they’re screaming about.”