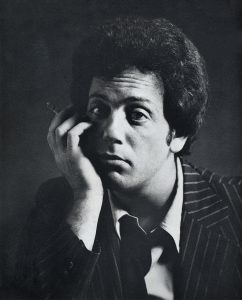 With 1974’s “Piano Man,” Billy Joel notched his first chart hit. But, as he later explained, “My career was neither here nor there at that time.” For 1976’s Turnstiles, his third album, the piano man from Hicksville, Long Island, put together top-notch material, the major consequence of returning home to New York City from California (as reflected in the song “Say Goodbye to Hollywood”).

Yet it took a long time getting the project off the ground. Jim Guercio, the producer for brass-rock bands such as Chicago and Blood, Sweat & Tears, began working with Joel. He wanted to use drummer Nigel Olsson and bassist Dee Murray, both part of Elton John’s band.

“Guercio, who I later became a good friend with, had an idea—‘Aha, Billy Joel, piano player!’” Joel remembered. “I didn’t think it was a good idea. I said, ‘No, no, I’m not Elton John. I’m Billy Joel.’”

Still, Joel tried that lineup for two months, without satisfactory results. “I was not a big entity at Columbia Records. I’d had a modest hit with ‘Piano Man,’ but that was it. So I said, ‘I’ll give it a shot,’ and I cut a couple of tracks. It was awful.”

Joel introduced the seemingly novel idea of recording his regular band. Ultimately, he headed to Long Island with his own guys and produced Turnstiles himself. “I had played the Village, a few clubs here and there,” he explained. “With the Turnstiles album, I put my own band together. They knew the music cold.”

The basic tracks were done in New York, but most of the vocals, the overdubs, the mixing and the production were done at Guercio’s Caribou Ranch in Colorado.

“I flew in the face of the commercially successful machine, because I ended up leaving Guercio and Caribou Management and producing my own album,” Joel said. “Which in a way sealed my fate corporately. I can’t tell you that I produced it any better than it could have been produced, but it was the first time I got to work with my own road musicians.”

The first ten days of April 1976, Joel played his first gigs with the band, at the Good Earth, a Boulder nightclub on the third floor of a building on what is now the Pearl Street Mall.

“While we were at Caribou Ranch, it was time to start playing live,” Joel said. “What I remember about Boulder is a lot of Earth shoes and hippie hair. It was the first incarnation of the touring band that I would keep in place for 17 years. That was the jelling of that particular group of musicians. I’d had Liberty (DeVitto, drums) in place for some time. Doug (Stegmeyer, bass) was fairly new. Richie Cannata on sax, Russell Javors on guitar…it came together at the Good Earth. We started making our bones there.”

Turnstiles was released in June 1976, and the success of “Say Goodbye to Hollywood” proved Joel’s decision to self-produce to be right. Suddenly everyone was paying attention. Turnstiles peaked at #122 on the Billboard album charts.

“Guercio, being the gentleman that he is, came to me and said, ‘You were right, I was wrong—good for you for sticking to your guns.’”

Then came a breakthrough with The Stranger, and a string of multi-platinum hits followed. Joel found himself at the summit of the pop heap.

“And you can trace our success as a touring and performing band back to our training ground, the Good Earth in Colorado.”