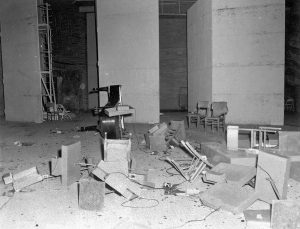 For several years, shows went smoothly at Red Rocks, with such acts as Bill Cosby, Herb Alpert & the Tijuana Brass and Peter, Paul & Mary providing light-hearted entertainment. But the vibe changed in August 1968, when a planned show by Aretha Franklin got nasty.

Tickets were $6; crowd estimates ranged from 1,800 to more than 3,000. The contract called for Franklin’s entire fee of $20,000 to be paid in cash prior to the performance. Promoter Carl Robinson said he had lost money on the show and couldn’t come up with the remainder of the purse until the following morning. Franklin refused to sing—and went on stage to announce her decision.

Most people left peacefully, but a few angry fans went on a 20-minute rampage, breaking up chairs, music stands, a grand piano and footlights; some protesters set fire to trees, bushes and trash piles around the park until the police could clear them out. Bottles and rocks were thrown onto the stage and metal trash barrels were rolled down the grandstand. Three people were arrested for attempting to steal microphones and speakers.

An upset Franklin went back to her Denver Hilton Hotel suite and cried. “I had full intentions of performing,” she stated. “I transported a 23-man troupe 2,100 miles to perform with me. I did this because I felt that the promoter would honor the contract that he signed.”