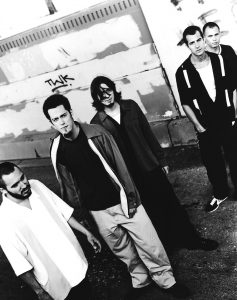 With singles like “All Mixed Up,” “Don’t Stay Home” and their biggest hit, “Down,” the guys of 311 won 1996’s alternative-rock lottery. The funk-rap-rock group had been on a steady climb toward success since 1992, conquering the Omaha, Nebraska rock scene and moving its base of operations to Los Angeles. Rather than rely on airplay, the guys of 311 built on the early buzz that surrounded their frenetic, charged live performances.

Thanks to radio station KBPI’s support, 311 headlined a 1996 sold-out show at Red Rocks.

“We played in California during the day, and then we hopped on a private jet, flew to Denver and played our Red Rocks show,” drummer Chad Sexton said.  “We played two shows that day—that was kinda cool.”

The band then released a long-form home video of live performances, Enlarged to Show Detail, that was certified platinum. It captured a moment at the Red Rocks concert.

“Denver always supported us. It’s one of the biggest markets where people were excited to see us,” vocalist/guitarist Nick Hexum said. “We tell a story in the video. Before we were signed, when we were moving to L.A. in 1992, we stopped to see some friends in Denver and hung out for a day. Then we drove by Red Rocks, actually made it up there, stood on the stage and said, ‘Yep, someday we’re going to rock this place.’

“You get really ecstatic when your dreams are coming true. Recalling that moment to a full audience at Red Rocks was very emotional for me.”