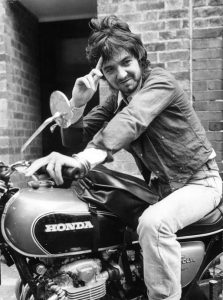 Today is the birth anniversary of Ronnie Lane, bass guitarist and founding member of two beloved British rock bands, the Small Faces and Faces. In 1994, Lane and his wife Susan moved to Trinidad, Colorado, where he died of multiple sclerosis in 1997. He is buried in the town’s Masonic Cemetery.